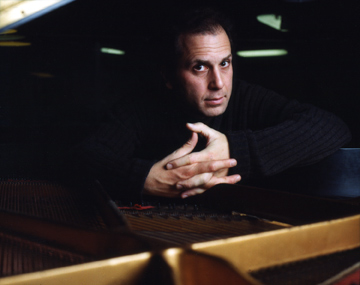 Larry has recorded 18 albums as a leader, hundreds more as a sideman, and has collaborated on a long-term basis with Maceo Parker, Jim Hall, Michael Brecker, and John Scofield. Goldings has been recording and touring with iconic singer-songwriter James Taylor since 2001, and is the featured musician on Taylor’s One Man Band CD/DVD, the culmination of a two year world-wide tour with James and Larry in duet. 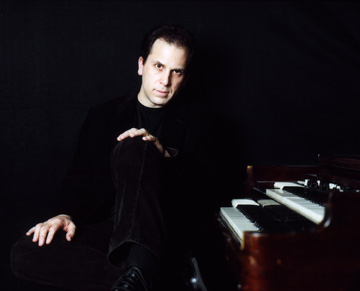 Goldings composed the music for the 2013 feature film Dealin’ With Idiots, written and directed by Jeff Garlin (Curb Your Enthusiasm). His music graces the soundtracks of Seth Rogan’s Neighbors, Judd Apatow’s Funny People, as well as the films Space Cowboys, Proof, NBC’s The Office, and most recently, an upcoming TBS sitcom, Your Family or Mine, for which Larry co-wrote the music. Goldings’ music is frequently heard on NPR’s critically-acclaimed This American Life.

Larry’s most recent recording, Music From The Front Room, is a freshly untraditional piano trio outing, with Larry playing Steinway upright piano, and features David Piltch on bass, and Jay Bellerose on drums.

In the mid 1990s, The New York Times described Larry Goldings, Peter Bernstein, and Bill Stewart as “the best organ trio of the last decade.” The trio, which has now been together for over 20 years, has been recognized for charting new ground, with its synergistic playing, yet thoughtful music. They have recorded nine albums and two DVDs together, all of which display their distinctive sound, whether exploring the depths of jazz standards, or playing their own original compositions. Of their newest offering, Ramshackle Serenade, (Pirouet), Downbeat said, “The whole album subtly subverts organ-trio cliches, offering not chicken-shack party stomps but instead some hip after-hours atmospherics…4 stars”Larry Goldings

With his signature Hammond organ style and versatility on many keyboards, Boston native Larry Goldings (b. 1968) has traversed not only the wide spectrum of jazz where he is perhaps best known, but also the worlds of funk, pop, and electronic music. High in demand as a sideman, Goldings’ sound can be heard on scores of albums by artists in virtually every musical genre.Over the years, Goldings has been closely associated with Michael Brecker, Jim Hall, Maceo Parker, Madeleine Peyroux, Pat Metheny, John Scofield, and since 2002, with folk/pop icon, James Taylor. In 2007, Goldings, Jack DeJohnette and John Scofield, received a Grammy nomination in the category of Best Jazz Instrumental Album Individual or Group for their album, Trio Beyond – Saudades (ECM).Goldings also is active as a composer, arranger, and producer. His compositions have been recorded by Michael Brecker, Till Brönner, Jack DeJohnette, Sia, Lea Michele, Bob Dorough, Jim Hall, Jane Monheit, Gaby Moreno, John Scofield, Mark Sholtez, Curis Stigers, and Toots Thielemans.

Goldings’ music also has been featured in television shows and motion pictures, including, The Office, Proof, Funny People, and Neighbors. He scored his first feature film, Dealin’ With Idiots in 2013, directed by Jeff Garlin.Peter Bernstein.Guitarist Peter Bernstein (b. 1967) has been an integral part of the world jazz scene since 1989. He has been sought out by musicians from all generations – touring with legendary players such as Jimmy Cobb, Lou Donaldson, Bobby Hutcherson, Lee Konitz, Sonny Rollins, and Dr. Lonnie Smith and jazz stars of today such as Eric Alexander, Brad Mehldau, Diana Krall, Nicholas Payton, and Joshua Redman. His recognizable guitar voice graces over a hundred recordings.As a leader, Bernstein has recorded six highly regarded albums, displaying not only his masterful interpretations of standards, but also his inventive and lyrical compositions. His latest project, Monk (Criss Cross), shows Bernstein’s deep understanding of the complexities of Thelonious Monk’s music, while never becoming overshadowed by Monk’s powerful personality. Bernstein also has taught at the Julliard School, Berklee College of Music, North Texas State University, the New School Jazz Program, and the Jazz Conservatory in Amsterdam.

Guitar legend Jim Hall said that Bernstein “is the most impressive young guitarist I’ve heard…He plays the best of them all for swing, logic, feel and taste, and has paid attention to the past as well as the future.”Bill StewartOriginally from Des Moines, Iowa, drummer Bill Stewart (b. 1967) made his name as the rhythmic force behind guitarist John Scofield’s band, collaborating with him for five years between 1990 and 1995. He is now one of the most sought after jazz drummers in the world. Stewart’s playing is distinguished by its melodic focus, and its polyrhythmic, or layered, character. Although his drumming bears the influence of various melodic and hard swinging drummers who preceded him, including Max Roach, Roy Haynes, and Jack DeJohnette, Stewart’s voice is clearly his own, and already is influencing a younger generation of drummers.Stewart has toured extensively with Michael Brecker, Kevin Hays, Lee Konitz, Pat Metheny, Joshua Redman, and Maceo Parker. His longstanding association with John Scofield has led to some of the highest quality records and live concerts in modern jazz.An excellent composer in his own right, Stewart has made several records as a leader that predominantly feature his own music, bearing the same thoughtfulness, humor, and impeccable taste that one hears in his playing.