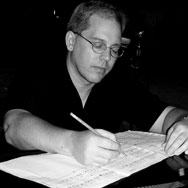 Rob Whitlock, a naturally gifted musician, finds himself equally comfortable writing, arranging and producing music, soloing spontaneously or comping supportively behind other soloists, making them sound even better themselves. It’s easy to see that Rob enjoys playing and even more enjoys whom he’s playing with. Musicians with this balance of style and grace are not as easy to find as one might think. Finding expression through an artist with this combination of gifts is what truley makes music a language in it’s own right, and Whitlock speaks it fluently.

Rob has been playing the Hammond B-3 organ since age eight, when his father, a well respected jazz guitarist in Miami/Ft. Lauderdale encouraged him to do impromptu concerts in their family living room for professional musician friends. He was greatly influenced by Jimmy Smith, Wes Mongomery and Charlie Parker recordings from his 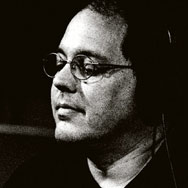 dad’s collection of jazz. On his own he discoverd Herbie Hancock, George Duke, Chick Corea, Miles Davis and Jaco Pastorius. The young musician quickly learned how to make a living by gigging around the area on keyboards as well as bass. At the age of seventeen, Rob met Jaco, who gave advice and encouragement to his younger friend. Jaco also sent friends to Rob’s father for guitar lessons, having learned quite a bit himself from the senior Whitlock. After having played with great musicians like Jaco Pastorius, Randy Berensen, Othello Molineaux, Carl Fontana, Joe Williams, Bill Watrous and “The Peter Graves Big Band”, as well as a host of unknown, but extremely talented New York transplants, Rob relocated to California at age 25, via a three year stint in Washington, D.C.

In California, Whitlock became involved with some gifted musicians and formed a band with them playing contemporary jazz by groups like “The Brecker Brothers”, “Yellow Jackets” and performed songs by writers Victor Feldman, John Scofield and Don Grolnick, as well as their own originals. During that time Max Bennett of “Tom Scott and the LA Express”, asked Rob to join his originals band, of which Whitlock is currently still a member. Not long after, he began touring with “The Jazz Crusaders” through the U.S. and Europe on keyboards. With AJ Croce, while playing the B-3, he toured Scandanavia, as well as many other destinations with the Dazz Band and Fattburger, for festivals and concerts.

After having completed two new cds for himself ( “Sketchin” and “Sketcthin’ 2” ), as well as two for his wife, vocalist Amber Whitlock (“The Colours of Life” and “The Circle” ), Rob is making plans to perform the new works in venues in the states and abroad. The musicians of choice for these projects were the incomparable Vinnie Colaiuta, Anthony Jackson, Scott Henderson, Cliff Almond, Pat Kelley and the amazing Michael Brecker. Also featured are old friends, Othello Molineaux, Wayne Johnson, Brian Price, his former college instructor, John Georgini, as well as Rob’s father, Bob Whitlock on guitar and pedal steel. The horn section was comprised of three of Rob’s favorites, Wayne Bergeron, Andy Martin & great buddy John Rekevics.

Rob’s new solo cd “Sketchin” incudes only a few of the talented artists he has come to know over the years, and includes original songs that he has written over the span of two decades. It has been above all, a labor of love; Love of music, of fellow musicians and their gifts, and of the enthusiast for whom he is happy to present this work, the jewel of his labor. In the words of eleven time Grammy Award winner Michael Brecker, “It was a joy to be a part of the Rob Whitlock project. In addition to his being a fantastic player/composer, Rob has a knack for bringing out the best in the musicians with whom he plays. This was fun.”