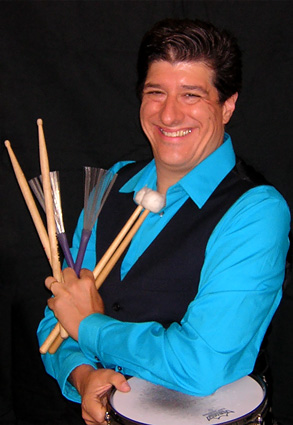 Rob has studied with Steve Smith, Mike Clark, Gary Chaffee, and the late Tony Williams. He established the Rob Hart Drum Studio in 1985. Some of his successful students have gone on to join renowned touring bands and award-winning ensembles. Rob is an active clinician and continues to conduct various rhythm section workshops in the San Francisco Bay area.

Rob endorses DW Drums©, Vic Firth© Drum Sticks and is currently signed to the Bay Area’s Simply Smokin’ Records. © The Rob Hart Trio’s debut CD, “Trios of the Past, Present, and Future,” is available through this website. A Selected track from this eclectic collection were chosen from nearly 700 CD entries nationwide and is featured on a Bethlehem Archives jazz label sampler CD entitled “Jazz You Must Own!” The Trio has just released its ambitious follow up double-live disc called “Art of Improvisation,” that captures the trios live spontaneity of live high energy improvisations, now available on this website.