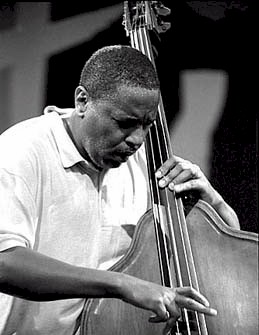 Robert Hurst came to fame for his work with Wynton and Branford Marsalis. He was originally a guitarist, but instead became an important bassist in the Detroit jazz scene of the late ’70s.

He recorded with Out of the Blue (1985), and went on to record with Tony Williams, Mulgrew Miller, Harry Connick, Jr., Geri Allen, Russell Malone, and Steve Coleman, among others.

Hurst was with Wynton Marsalis’ group during 1986-1991, switched over to Branford’s band, and became a member of the Tonight Show Orchestra. Robert Hurst, a very supportive bassist, debuted as a leader in 1993 with a release on DIW/Columbia.