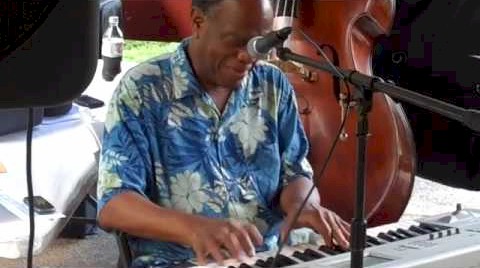 Not much is known about piano sideman and occasional vocalist, Tennyson Stephens. He maybe hailed from the Bay Area and found his way to Oahu, playing gigs here and there, for favored singers and the tourists in Waikiki.

Stephens paired up with guitarist Phil Upchurch back in the ‘70s for a seminal jazz-soul album entitled, “Upchurch/Tennyson.” Much has been made of Upchurch’s rise as a busy Chicago session player who managed to produce his own sound throughout the works of John Lee Hooker, B.B. King, Ramsey Lewis, the Staple Singers, Muddy Waters, Jimmy Reed, as well as come out with his own 1960s hit single, “You Can’t Sit Down.” Upchurch kept it going on for various record labels and still tours with several bands, including his own, today.

But Stephens – known by fellow musicians simply as Tennyson – pursued a more laidback, Hawaiian lifestyle, away from the hustle and bustle—and renowned unfortunately—of the Mainland. It didn’t mean he retired from jazz.

Early on, Tennyson made the rounds, from recording projects, to regular gigs. He slowed down some, because of health problems, like gout, which would flare up now and then. By the ‘90s, his appearances were few and far between.

So, when you saw him at, say, Duc’s Bistro in downtown Honolulu, accompanying Azure McCall, or at Halekulani’s Lewers Lounge with bassist Bruce Hamada, it was a real treat—for him and those he played with.

Tennyson gained a cult following for many reasons. He was exciting and mysterious. He could block chords in odd harmonies like nobody’s business. He enjoyed arranging and composing as he played his solos. And he made those he performed with work a little harder, play a little better.