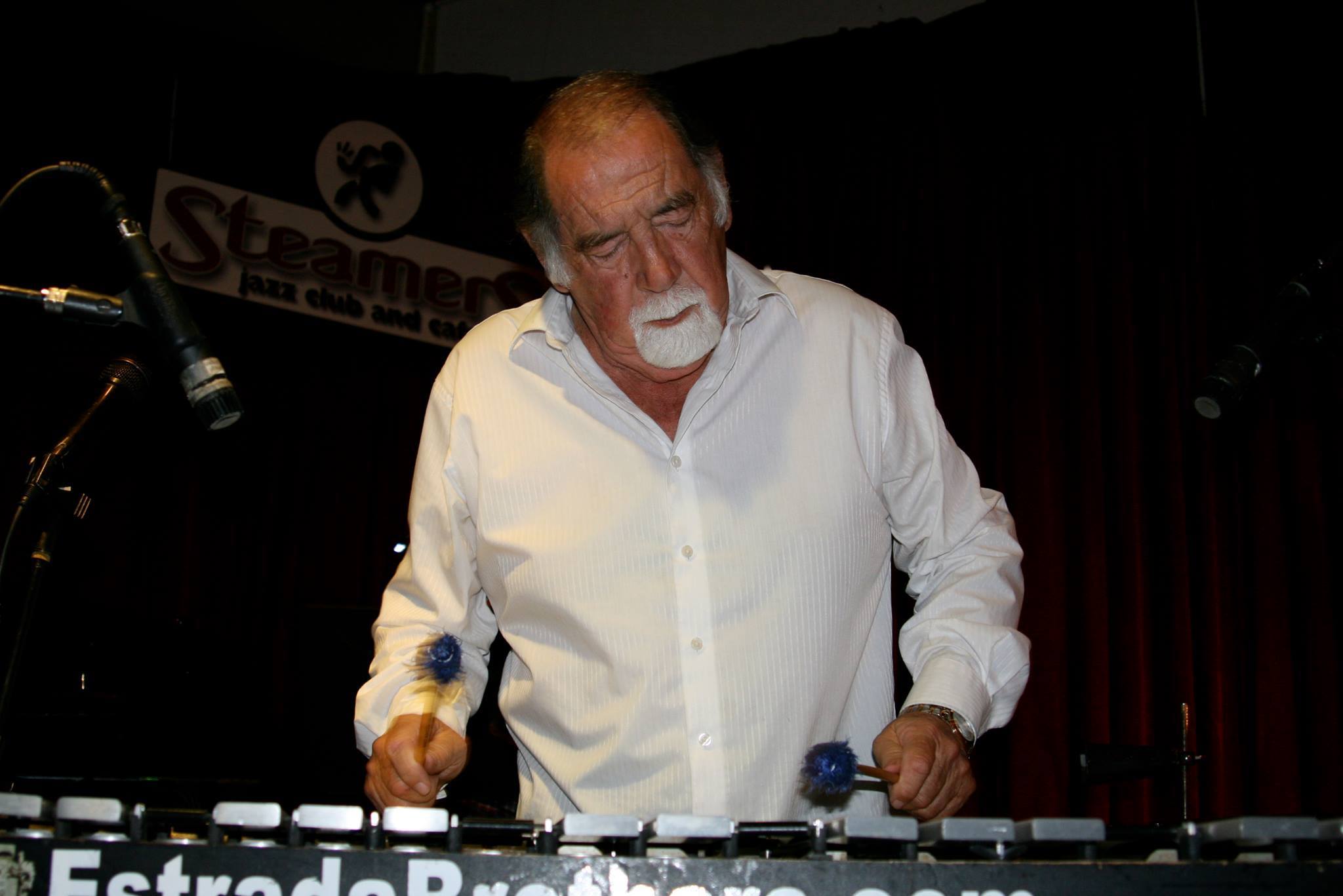 Ruben Estrada was born March 18, 1938 in Ventura County, California. He is the youngest of seven brothers and two sisters. H…e comes from a musical family. His father, Louis D. Estrada was a violinist who had a ten a piece orchestra in the 1930’s. Ruben started playing professionally as a drummer at the age often joining his old brother Angel’s band.

Unfortunately, due to the child labor laws at the time, somebody ratted Ruben out to the local authorities and he was put on the sidelines for several years. He continued his education and when he reached high school the musical director of Oxnard Union High School taught Ruben how to play the trumpet. He later took up the congas, bongos and all other percussion instruments. The piano was of course, the first instrument of all the brothers.

Once he turned eighteen Ruben joined his brothers as a regular and permanent member of the Angel Estrada band. This was in 1956. The following year Ruben married his high school sweetheart Delia and started a family. It was a union that would last for forty- three years until Delia’s untimely passing in 2000 after a long and courageous battle with cancer. Throughout it all she demonstrated 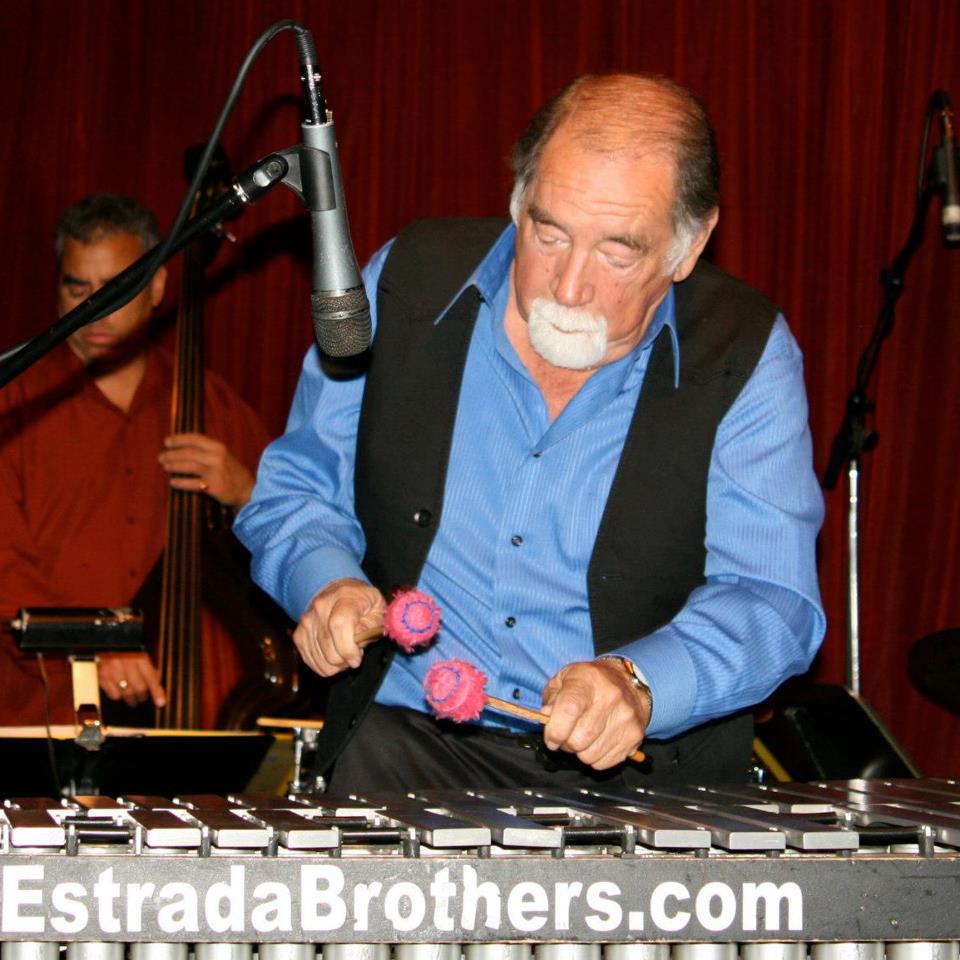 tremendous faith, optimism and bravery that was truly commendable and awe-inspiring. Angel Estrada not only was the leader of the band but also owned and operated four salons in which all four of the brothers cut hair at. It was also he who decided that the group needed a vibraphone.

In the late 50’s and early 60’s it seemed as if all Latin groups were utilizing the instruments so Angel felt that his group needed one as well to remain current and competitive. He and the brothers all pitched in to purchase one. Angel played the piano in the band and when he switched to vibes Ruben would play piano behind him. Angel simply had no affinity for the instrument and lost interest in it almost immediately. This left Ruben who took to the vibes like a duck takes to water. It was also around this time that Ruben became totally enamored with Cal Tjader. He was also a big fan of Tito Puente as well as local latin vibists Tony Martinez, Manny Lopez and Bobby Montez. However, Tjader was and always will be Ruben’s main man. Ruben purchased every Tjader album he could get his hands on and attended every personal appearance Tjader made locally whenever he could.

The Angel Estrada band worked steadily and was in great demand in the Oxnard-Ventura-Santa Barbara area throughout the 1960’s. They played music for all occasions; weddings, receptions, anniversaries, birthdays, etc. In the early 70’s Angel and his wife went into real estate so he left the band. The remaining siblings, Bob, Henry and Ruben now became known as the Estrada Brothers band. The group continued to flourish into the 1980’s until Bob left to pursue his own career, thus leaving Henry and Ruben to carry on the tradition of the Estrada Brothers. They did so throughout the 1990’s. Henry only plays with the band once in a while now when he feels like it or on special occasions, usually when the gig is close to home. He is every bit the class act and outstanding musician that his brother Ruben is. Ruben is now the sole heir (survivor might be a better word) to the Estrada Brothers legacy. Even son Cougar, who is now the regular drummer with the world renowned Latin-rock band Los Lobos is only available to play with his dad when his busy schedule permits it, which isn’t often.

If it weren’t for Ruben, the Estrada Brothers band would simply no longer exist. It would be like the Modern Jazz Quartet without Milt Jackson. The Estrada Brothers band (or as it now should be called the Ruben Estrada Band) is still one of the most exciting latin- jazz bands around. Anywhere Ruben plays feels like a party whether he is playing at a party or not. This is not to suggest that Ruben or the many variations of his band are not serious musicians. Ruben’s many groups have opened for such jazz legends and icons as Dave Brubeck and Stan Getz. He has also opened for Tito Puente, known as “El Rey” the king of latin- jazz who has been called the Duke Ellington of Latin-jazz. These are very impressive credentials to say the least. There are at least half a dozen other bands up and down the California coast that are fronted by vibists who play Latin-jazz in the Cal Tjader tradition. I know all of them personally and am a friend, fan and supporter each.

However, Ruben is the chairman of the board. This is not just my opinion. Ten years ago in 1995 conguero, band leader and former Tjader sideman Poncho Sanchez chose Ruben to play the vibes on his recording “Soul Sauce : Memories of Cal Tjader” which to me is a masterpiece that I feel should have won the Grammy that year. It is among the best of Sanchez’s many discs and this is due in large part to Ruben’s participation and contribution to the project. Poncho Sanchez has the popularity, power, prestige and influence to have acquired the services of any number of big-name vibraphone superstars. The fact the he chose Ruben speaks volumes. Sanchez knew from the get-go that Ruben was the perfect candidate for the job. He was the only one who could fill Tjader’s shoes convincingly. It would not have been the same or as good without him.

Of the three or four commercially released Estrada Brothers recordings only two are still available, “About Time” and “Get Out of My Way”. This one, “Two for the Road”, is without a doubt Ruben’s best. Ruben is a true artist who is sensitive yet not temperamental. He loves the creative process of the music itself but has no fondness whatsoever for the business end of it. That part he would gladly do without if he could. Unfortunately, that is simply not an option. He has to be a businessman at times whether he wants to be or not. He is at his best and most comfortable when he is behind his instrument in front of a large and enthusiastic audience. When he feels the warmth and affection from an attentive and appreciative crowd, he can truly be inspired to greatness. What he improvises with his mallets on his vibraphone comes directly from his heart and mind. It speaks louder and clearer than anything he or any one of us could ever say with words. It is his way of reciprocating the love and loyalty his following has given him by gathering to hear him in the first place. (reprinted with permission by Mal Sands 2005)