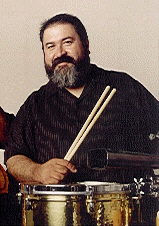 Although he began his musical life as a guitarist, Ramon Banda took over the drum chair in the family band in 1967. Along the way he has become one of the most respected and in demand Drummer/Percussionists today. His unique style and hard grooving approach evolved naturally from his formative years on the Los Angeles music scene.

Most familiar to U.S. and international audiences for his work on timbales with the Poncho Sanchez Latin Jazz Band, Ramon participated in over 22 recordings, countless world tours and educational workshops over the past two decades. Ramon has now ventured out on his own, working with a variety of artists, including live performances, session work and private instruction.

Playing with an energy and conviction that is soulful, relaxed and intensely swinging, Ramon signs all of his art that way, but never more so than when he along with his brother Tony head up their own ensemble, The Banda Bros. Group. Formed in 1996 with a powerful emphasis on straight-ahead Jazz as well as drawing from the rich Afro-Caribbean traditions. The sextet has a unique talent for bringing insight and imagination to original material as well as covered classics, providing the perfect balance of accessibility and invention.