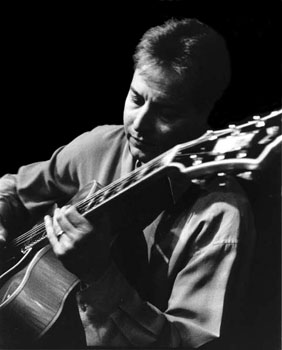 Guitarist Pat Kelley has recorded eight CD’s as a leader, toured in more than thirty countries, worked as a Los Angeles studio guitarist on hundreds of sessions for records, television, commercials, and motion pictures, and composed more than a hundred songs that have been commercially recorded.

He was the house guitarist for several years on the Merv Griffin, Pat Sajak, Joan Rivers, and Carol Burnette television shows and has performed with symphony orchestras in San Francisco, San Diego, Houston, Atlanta, Tulsa, Denver, San Antonio, and Toledo.

In June 2003, Pat was inducted into the Oklahoma Jazz Hall of Fame, being honored by his home state, in his hometown of Tulsa. Other past inductees have included Charlie Christian, Chet Baker, Barney Kessel, Oscar Pettiford, and Lester Young.

Currently Pat holds a full time teaching position in the Studio/Jazz Guitar Department at the University of Southern California and is also an active guitarist, songwriter, producer, and engineer.