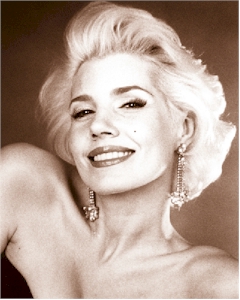 Pamela Stonebrooke, also known as the Intergalactic Diva, is a wild-child jazz vocalist, songwriter and recording artist. Her contralto voice is deep, lush and textural, and as a songwriter, she is an urban journalist with an IQ, tackling subjects such as Plastic Surgery (Vanity), Aliens (Alien) and the women behind the glass booths (Sex Under Glass.) She looks at life and mirrors it back, with a tongue-in-cheek, non-judgmental approach.

Her voice has been described as an “aggressive Billie Holiday, chased with Shirley Bassey, and has a language unto itself.” A Kent State graduate in Theater, she is a professional jazz singer, having spent three years studying in the Village in New York City and nearly twenty years in Los Angeles, where she was a regular at the Hollywood Roosevelt Cinegrill and The Catalina. She was a favorite and requested jazz vocalist for the late Gene Roddenberry and played for his last four birthday parties.

She was opening act for Kenny G, The Pointer Sisters, and the Neville Brothers and has toured Europe as a solo artist and as a featured vocalist for Sparks and Hoyt Axton, with whom she sang solo numbers on the same bill as Johnny Cash, Tammy Wynette, and Jerry Lee Lewis. She has shared the stage with Joe Sample, Ivan Neville, Graham Nash, and a host of others. She was a session singer in Los Angeles, both as a featured and backup vocalist, with many high profile artists. She has had several record deals, three music score collaborations to her credit and over a dozen of her original songs have been used in film. Now residing in Houston – she has played Cezanne, The Magnolia Hotel, Tommy’s and other private events. She is currently finishing her new jazz CD of original material, soon to be released.