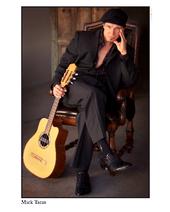 “So much music, so little time”. That’s probably the most important philosophy adopted by guitarist Mick Taras.

Forced by his mom to take piano lessons at the age of 6 thru 14, Mick, developed sense of rhythm and melody very early in his life, even though without having too much fun with it. “I am so grateful for those years of painful piano lessons” Mick admits today…”.that’s when I learned how to read and write music and most important that’s when I learned all the music theory concepts”.

Mick picked up the guitar at the age of 15 and after only a few years of strumming along a few chords inspired by Bob Dylan and Neil Young, he found himself on the road of a major tour at the age of 18. “Joe Perrino and the Mellowtones” was the Italian band that between 1984 and 1987 had 3 top 5 hit singles in Italy, France and Germany. “I owe everything to that rock’n roll band…they put the passion for the job into my system and they inspired to pursue music as a full time career”. It was during that time that Mick started doing his first recording sessions and that’s when he quickly discovered the blues and the R’n’B phenomena. Mick led the R’n’B band “That’s all folks!” thru a year of opening shows for the legendary B.B. King thru out Europe.

Mick moved to the USA at the age of 25 where he attended 2 years at the Guitar Institute of Technology of Hollywood. His passion for Country and Bluegrass was dominating his life at that time and Guitarist Steve Trovato took Mick on the road as a second guitarist for his Country/Bluegrass band. His first 2 years in the States saw Mick touring with legendary country acts such as Suzy Bogus and Boy Howdy. In 1995 Mick was nominated “Best mandolin Player of the year” by the Country Music Association for his recording for the debut record of the band “Platte River Crossing”. 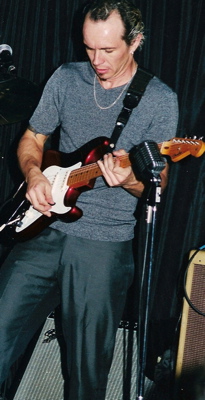 !997 was the year when Mick entered the world of Rock; he played guitar with the Motels thru out the year 2000 and those years included the recording of their live DVD “Live in Sidney, Australia” and their live CD “Live at Universal”; when the Motels were off the road and not recording in the studio Mick toured with RCA recording artist “Leah Andreone”.

Jazz guitar was never too far away from Mick during all those years. “When I have time to play guitar for myself, that’s what I study and practice: the art of moving thru chord changes”, Mick reveals. His biggest influences have been and still are George Benson and Joe Pass who he studied with many times. Mick’s jazz work can be heard in legendary trumpet player Tony Guerrero record releases and in the recordings of singer Tracy Lewis.

As if Blues, Country, Bluegrass, R’n’B, Rock and Jazz wasn’t enough to think about for Mick, he also found the time to understand and study the art of guitar in Hip-Hop music. That work led Mick to a major tour with Soul Award winner Faith Evans in 2002.

Today Mick is a constant presence in all the major Christian Rock recordings and his passion for Gospel music ca be heard every Sunday morning at Saddleback Church, Lake Forest .
He also tours and records with Salsa band “Combolux” , where he plays “Tres” (cuban guitar).