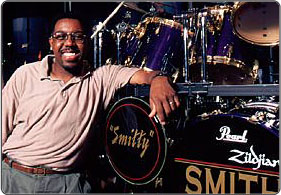 Since that time he has performed with Branford Marsalis, Terance Blanchard, Donald Harrison and Sting among many others. Smitty is currently the house drummer for NBC’s Tonight Show Band.

“It was a very natural inclination for me to play drums,” says Marvin “Smitty” Smith. A glance at his early life validates that truth. Born the son of a drummer, Marvin, Sr., was always surrounded by music in the house.

At six months old, he would climb up on the large lounge chair positioned directly in front of his father’s drum set and would watch him practice, intensely. Whenever his father took a break, he would crawl over and press the foot pedals and attempt to emulate his dad. That experience, and banging on pots and pans, was the extent of his playing until he began formal training at the age of three.

Today, Marvin “Smitty” Smith is a young musician extraordinaire whose work has been described as a “comment on invention, firm and adventurous time and technical sufficiency.” He has traveled extensively throughout the Orient, Europe, and the continental USA; and he has shared the stage with such greats as Sonny Rollins, Hank Jones, Frank Foster and Frank Wess, Art Farmer, Benny Golson, Slide Hampton, and Milt Jackson. He is a former member of the Ron Carter Quartet, The New York Jazz Quartet, and The Art Farmer/Benny Golson Jazztet.

Smitty has been Downbeat Critics’ Poll winner for Talent Deserving Wider Recognition, 1985 through 1987, and 1989. Smitty performed on the Soundtrack of filmaker Spike Lee’s “School Daze”, appeared in Sonny Rollins’ music video “Saxophone Colossus”, and a member of Sting’s “Nothing Like the Sun” South American tour, 1987.

Regarded as a well rounded musician with the ability to play all styles, Marvin “Smitty” Smith is a blossoming composer and arranger, and his success has earned him two albums as a bandleader. As a versitile drummer, there seems to be nothing be cannot do. It’s been said that he is the “John Coltrane of the drums..”