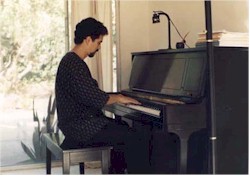 This extremely talented pianist/composer/instructor goes waaaaaay back with Michael Andrew and has performed with Michael over the years in both the Florida and in California music scenes. He has a stable of celebrity students which he enjoys teaching.

He is originally from New York City. John has some fulfilling side projects such as working with the Dwight Tribble Band. “Dwight has really been influential in giving me lots of exposure in LA. The Band blends BeBop, Modal Jazz, Swing, Latin, African styles together. I call it “soul jazz’. Music from the heart, mind, and spirit. There is such variety it is hard to describe. It is played by acoustic instruments. Sometimes we have saxophone work by George Harper or Charles Owens. Sometimes there is poetry by Kamau Daoud.”