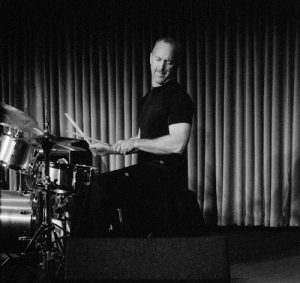 RAY BRINKER is a professional drummer based in Los Angeles, CA. Ray received a Bachelor Of Music in Jazz Studies from North Texas State University, and performed as a member of NTSU’s Grammy-nominated 1 O’Clock Lab Band. Upon graduation from NTSU, Ray toured worldwide with jazz high-note trumpet player Maynard Ferguson before moving to the West Coast, where he has become a staple in the Los Angeles studio and performance scene.

GRAMMY NOMINATIONS: As a founding, 23-year member of the Tierney Sutton Band, Ray has co-arranged and recorded 10 CDs. The band has garnered 5 consecutive Grammy Nominations for “Best Jazz Vocal Album”, and Ray has received a Grammy Nomination as co-arranger for “Best Arrangement Accompanying A Vocalist”. Ray is also a member of the Grammy winning Gordon Goodwin Big Phat Band.