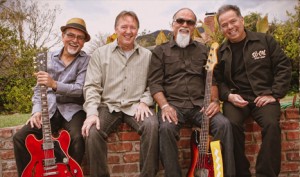 Los Angeles, CA. US – Driven by fierce independence, unified by family, and fortified by the brotherhood of music, the Delgado Brothers deliver the musical goods; topical anthem-worthy songs complemented by call-to-action lyrics, and East L.A. Soul.
For over 30 years the Delgado Brothers have been music makers, collaborators and ordinary citizens; raising children, grieving the loss of parents, marrying & divorcing.
All of this life experience may explain their flare for illuminating everyman’s joys, sorrows, triumphs and losses. The Brothers’ music has long been embraced both locally and globally by a wide spectrum of people undivided by culture, age or socioeconomic status.
The Delgado Brothers have longtime been referred to as Los Angeles’ best kept secret. So just who are these quintessential musicians? The Delgado Brothers are eldest brother Bob Delgado on bass, middle brother Joey D on guitar and vocals, younger brother Steve on drums and vocals, and David “B” Kelley on Hammond B3.
Each member of the band brings a unique style of musicianship to the Delgado Brothers brand. Indiana- bred David B. Kelley came West in search of “groove and diversity”.
An incredibly gifted musician, David’s playing on his “Vintage 1972 Hammond B3” adds tone, texture and depth to the sound and songs. To witness a Delgado Brothers live performance is to testify to the synergy, emotion, work ethic and true musicianship of the band.
Their latest, self-released 4th CD, Learn to Fly, is testament to the bands long evolution and scope of musical diversity. Raising a variety of real world concerns from the topical, ‘I Wanna Know (what the fighting’s about)’, to the meaningful and brilliantly nuanced, ‘Man Without Plan’.
Los Angeles is filled with a brotherhood of world class musicians, studio players and living legends. So when word got out that The Delgado Brothers were in studio recording their latest release, all the brothers needed to do was ask, and a who’s who of musicians responded. Evidence that by the lineup of players on Learn to Fly. Lee Thornburg led and arranged the all star horn section of Paulie Cerra & Arturo Velasco.
Critically acclaimed Latin jazz players, The Banda Brothers syncopate and elevate with Ramon on timbales and drums and brother Tony on bass. Slide guitar great David “Hound-Dog” Melton and blues singing sensation Sherry Pruitt lend their soulful skills. Last but far from least, the Delgado Brothers are joined by The Legendary Chambers Brothers of classic hit songs ‘Time’ & ‘People Get Ready’ fame.
Hardworking and heartfelt, each and every song represents a soaring musical vignette expressing dynamism of musicianship, humanity, & soul.
When asked what propels and inspires the lyric writing, singer, drummer, brother Steve explains, “If you don’t think about the future, be it the environment, your family, your marriage or your job, later on down the road, you’re gonna be sorry. You’ve got to do the work”.
Always original and intensely prepared, these journeyman musicians fully infuse all of their song crafting talent with a sense of urgency and an authentic emotional aspect that rings true with intelligence and depth.
Tug on the Delgado Brothers musical roots and you’ll find big brother Bob’s bass-playing days tied into the East Los Angeles band, Thee Exotics circa 1960’s. Yet another brother, Eddie played with Thee Ambertones during the same period. Creating a perfect musical environment, for younger brothers Steve and Joey only to aspire to.
For years the Delgado Brothers band played venues, clubs and special events throughout Los Angeles and the San Gabriel Valley. In 1987 after being sighted at the in-famous “L.A. Street Scene”, they released their first album on the Hightone Records, with Dennis Walker and Bruce Bromberg, the same producers responsible for Robert Cray’s hit-making success.
After selling 25,000 units worldwide, disappointed, Hightone dropped The Delgado Brothers. “What that experience taught us is that we had to stay true to our artistic convictions and vision. In order to accomplish this we were forced to either wait for the right opportunity, or choose not to seek another record deal”,says guitar playing brother Joey D.
By 1994’, disillusioned, the band stalled out and called it quits. But in 1996, credit goes to long-time Delgado Brother advocate, harp player, recording artist, producer and longtime friend, John “Juke” Logan for reuniting the band. In 1997, the brothers recorded and released their second album, Let’s Get Back, on Logan’s own Mocombo Records. Considered their most blues-centered release by blues aficionados, this album was well reviewed and features a Delgado Brothers perennial signature song, ‘Church of El Monte’.
“The great thing that happened with Let’s Get Back is that John Mayall (John Mayall’s Bluesbreakers) covered two of our songs, ‘If I Don’t Get Home’, and ‘Something About My Baby’, on his album ‘Along for the Ride’ in 2001,” My brother Bob and I also contributed bass and guitar parts to ‘If I Don’t Get Home’, making us honorary Bluesbreakers”, states Joey D.
Royalties from the sale of those two songs financed the release of their third CD, ‘A Brothers Dream’; and the start up of the brothers own Bell Asher Records in 2003.