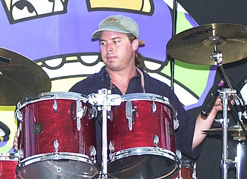 Darren DeBree began his performing career playing drums with a variety of funk and progressive alternative rock bands in San Diego. In 1997 he moved to L.A. where he studied with composer/drummer Richard Wilson and attended Musician’s Institute.Graduating from the school with their professional music and journeyman certificates, he worked for a time in L.A. where he and his partner “The Cuban” wrote music for the Reyes Brothers; a group featuring rap star Sen Dog of Cypress Hill and his brother Mellow Man Ace.

Darren’s involvement with hip hop and electronic music began his exploration of electronic drums and percussion. In 1999 he moved to Nashville where he played acoustic drums with Function, a blues rock/jam band and Eddie Okri and the legacy, a nationally touring reggae band. Returning to San Diego in 2000 brought him full circle geographically and musically as his involvement with Agent 22 has allowed him to combine the acoustic and electronic drum worlds into his own unique voice.