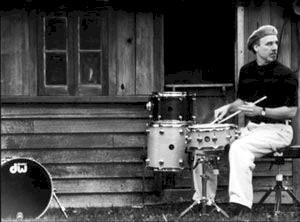 What do Neil Peart, Steve Smith, Dave Weckl, and Bruce Becker have in common…..? All of these drummers have sought the unique insights and perspective on balance and motion from drum “guru” Freddie Gruber. Gruber’s reputation rests upon an approach that stresses a more efficient use of the drummer’s anatomy. Gruber has often been referred to as the “zen” master of teaching. This rare insight into this approach was spurred on by Freddie’s close 40 year friendship with Buddy Rich. It can clearly be seen in Buddy’s playing. Bruce started his studies with Freddie back in 1977.

It was at this time when Freddie’s activity was at its height. Bruce not only studied for 8 years, but watched Freddie teach. Over the years Bruce was present for hundreds of students and became increasingly aware of the value of Freddie’s approach. He was also able to watch the evolution and changes Freddie made in response to musical styles and drum innovations of the time. “I was there at a unique time during the late 70’s and mid 80’s. The pace at which I saw Mr. Gruber evolve was mind boggling. I would literally spend hours and hang……and this went on for years”, Bruce recounts in a June ’93 interview in Belgo Beat (Belgian Drum Magazine). Upon relocating to Europe in 1992, Bruce spent quite a bit of time traveling with Gruber. Together they did a series of Clinics and Masterclasses in Belgium, the Netherlands and Germany.

While Gruber would pontificate, Bruce would demonstrate on the drums. At this time Bruce also became the Head of the Drum Dept. at A.I.M. (American Institute of Music) in Vienna, Austria. There he spent time actively putting his thoughts and concepts together based on all that Gruber had shared with him. Bruce’s conceptual approach and unique ability yields great results. His equation is Balance + Motion = Emotion. He offers the most comprehensive insight into the teachings of Mr. Gruber, and has been teaching since ’82. Since returning to Los Angeles, Bruce teaches privately and has a steady stream of working drummers.