Brad Rabuchin grew up in Pasadena, Ca oblivious to the classic rock era of the 60s until one night on TV catching Mason Williams playing his guitar instrumental “Classical Gas” on a guitar with fish swimming around inside of it! He then delved into playing, first mostly acoustic finger style and later getting into electric but never finding a way to incorporate fish.

Brad studied music at Pierce Junior college but his musical identity was more drawn from self study and several excellent private teachers including Derol Coraco, Ted Greene and Joe Pass. Brad Rabuchin now splits time between leading his own band and a successful carrier as a sideman.

Brad also spent 5 years and toured 6 continents as the last guitarist with Ray Charles . All the while, though, Rabuchin has also been honing his own unique musical voice, just left of center. 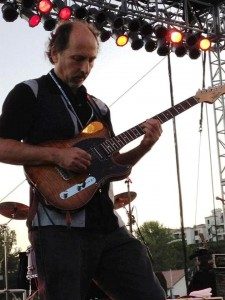 Guitarist Brad Rabuchin is not one to paint by the numbers, musically speaking, or play by a given set of rules.

That much is clear on his 2 solo albums “When Smart Dogs Go Bad” and “ Cats Have Edge” .They are jazz albums with liberal doses of other, mutually compatible influences, from rock to funk to ethereal aesthetics, and back.