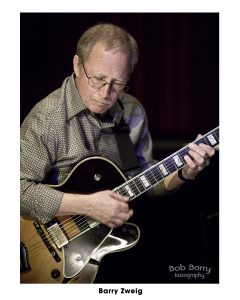 “Barry Zweig is one of the most highly respected jazz guitarists on the LA music scene. A skilled accompanist and soloist, Barry’s love of the instrument shines through every aspect of his playing” writes noted acoustician and studio designer Jeff Cooper.

Barry was born in Detroit, Michigan on February 7th, 1942. His love for music came naturally. His mother, Diane, always had music playing on the radio and on the record player. She loved the great songs of the immortal composers of the “Great American Song Book”, especially George Gershwin. She loved to sing harmony parts to the songs that came on the radio.

She taught Barry to clap on 2 and 4 when he was a little toddler.  When she asked him what he wanted for his fifth birthday, Barry asked for a banjo. He must have seen one in a movie. His folks gave him a round Gretch ukelele instead, and he’s been playing music ever since. He played the violin from the age of eight until he was eighteen. Just before his fifteenth birthday he heard the mellow sound of the jazz guitar on the radio. The tune was Mountain Greenery by the Dave Pell Octet. The arrangement had jazz and classical elements and a unique guitar part. “I could do that!” he thought to himself and he soon had his first guitar, which cost the grand sum of ten bucks.

In 1964 Barry was drafted into the Army. He had the incredibly good fortune to be assigned to the NORAD Band in Colorado Springs, Colorado where he got the opportunity to study with the legendary guitarist Johnny Smith. After his discharge from the Army he soon was called to join the Buddy Rich band. He played on two albums with Buddy Rich including one with Sammy Davis Jr. Sammy must have heard something he liked because he asked Barry to be his guitarist.

Barry toured with Sammy Davis Jr. for fourteen months. In 1968 Barry decided to settle down and break into the Los Angeles music scene. Since then Barry has played for, and/or recorded with Peggy Lee, Natalie Cole, Willie Bobo, Herb Alpert, Doc Severinson, Ray Conniff, Henry Mancini, Andy Williams, Bill Holman, Don Ellis, Gene Estes, Abe Most, Dave Pell, Keely Smith, Al McKibbon, Jackie Ryan and many others. He was the guitarist for Dinah Shore on her television show from 1976 until 1981. Barry has taught at UCLA, USC, and the University of Texas at El Paso.