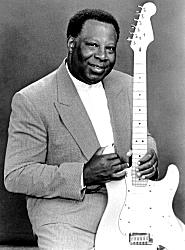 Born in Collins, Mississippi in 1943, Bill moved to New York (upstate) at age 13 where almost immediately he got into the music scene.

In the early 1960s Bill met and eventually joined a band led by Jimmy James (later known as Jimi Hendrix). This led to his own band “The Kansas City Playboys” which became the opening act for James Brown & his Revue.

Years on the chittlin circuit followed and finally tired of the road in 1987 Bill relocated to San Diego. He continued his hiatus from music until 1993 when he came out to take local bookings. He has quickly become an important part of the San Diego Blues scene.