Listening for the first time to Andy Bey is like stepping into a quiet, still lake. Your foot first parts a surface that’s smooth and tranquil, but you can’t really tell from that surface how deeply your foot must go to reach bottom. The first time you hear Bey’s delicate yet muscular voice – alone, accompanied only by his own piano, or in larger ensemble contexts – it’s like stepping into the edge of a lake that you think goes down only two feet, but finding out it’s eight feet deep. You’re submerged, lost in the deep music by surprise, almost before you know it.

Bey’s jazz and blues may be smooth, but they’re nothing like “smooth jazz.” Born in 1939, the Newark (NJ) native was a genuine child prodigy as a pianist and singer, garnering appearances at the famed Apollo Theater and on television’s “Spotlight On Harlem” and “The Star Time Kids,” sharing stages with the likes of Louis Jordan, Sarah Vaughan and Dinah Washington, before he turned 18. He then formed a vocal trio alongside his sisters Salome and Geraldine and embarked for Europe; Andy & The Bey Sisters were celebrated regulars at The Blue Note in Paris and other venues in Europe from the late 1950s into the early 1960s, when they returned to the U.S. and continued to perform and record (for RCA and Prestige) until the trio disbanded in 1966. 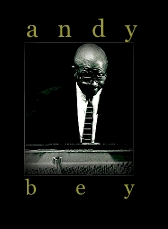 For the two decades thereafter, Bey recorded and performed with such notables as McCoy Tyner, Lonnie Liston Smith, Thad Jones / Mel Lewis, Eddie Harris and others. He was featured vocalist on Gary Bartz’ acclaimed Harlem Bush Music projects and for an extended period with Horace Silver, including Silver’s The United States of Mind album sequence. In 1991, Bey returned to Europe to teach vocal instruction in Austria; he remained there until ’93, when he returned to the States to record his “comeback album,” accompanied only by his own piano, called Ballads, Blues & Bey.

AThe release of Ballads, Blues & Bey in 1996, and his subsequent Shades of Bey, recorded with Bartz, Victor Lewis, Peter Washington and other jazz notables and released in 1998, heralded Bey’s “renaissance” in the business he’s been in for nearly five decades. Which leaves Bey somewhat bemused: “I never went away, actually. I don’t know about this “renaissance.” It’s…well, it’s new in a sense, but it’s not like I left the business.”

One of the great unsung heroes of jazz singing, Andy Bey is a commanding interpreter of lyrics who has a wide vocal range and a big, rich, full voice.