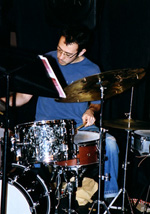 PAUL KIKUCHI is a percussionist, composer, and instrument maker from Indianola, WA. Paul holds degrees in music from Bennington College and California Institute of the Arts, where he studied closely with Milford Graves, Wadada Leo Smith, and Vinny Golia. Currently, Paul’s main project is the Los Angeles based Empty Cage Quartet, though he is also an active member of other bands such as the avant-rock group Clouds of Blood.

Kikuchi has been known to collaborate with musicians such as Marlyn Crispell, Daniel Carter, Paul Plimley, Wayne Horvitz, and Gregg Keplinger, and has recently performed at the Vancouver International Jazz Festival and Seattle’s Earshot Jazz Festival. Paul is also a music educator. Recently he has been incorporating learning methods and somatic awareness drawn from his knowledge of the Feldenkrais Method into his music teaching. He is currently music faculty at the Art Institute of Seattle, Academy of Creative Education, and West Sound Academy. He lives in Seattle, WA.