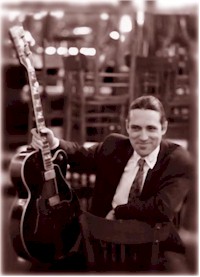 Born and raised in Melbourne Australia, guitarist Mark Cally spent 10 years in New York City, during which time he worked with musicians such as Jon Hendricks, Doc Cheatham, Eric Alexander, Vincent Herring, Brian Blade, Sherman Irby and Bernadette Peters. From 1995 through 2000, he was the resident guitarist on call for The Juilliard School of Music. Along with Ingrid Lucia, he was a founding member of the Flying Neutrinos, and penned many of their best known songs, including “Mr. Zoot Suit.”