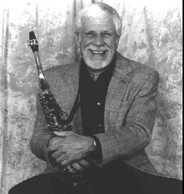 Lanny Morgan is a brilliant bebop alto soloist. As a leader of his own group and a solo performer, he has been on the scene in the US and abroad since 1969, playing every major jazz club and festival that exists and guesting as soloist/clinician at colleges and universities in nearly every state of the union.

“A brilliant bebop alto soloist often overlooked because he lives in Los Angeles rather than New York, Lanny Morgan is one of the underrated Greats: few can rip through Cherokee with his flow of ideas.” 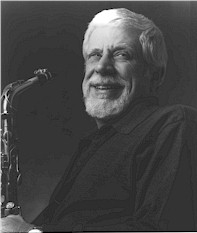 Countless critics and fans agree-in the U.S. and especially elsewhere-accounting for two upcoming repeat tours of the U.K. (April/May and October/November, 2003), where he has become a frequent frontliner with British musicians.

Morgan first came to prominence in New York, as the young lead alto for Maynard Ferguson’s Big Band of the sixties, as well as the MF Sextet of the same era, and clubbing with his own group in the Big Apple.

He has occupied many hot seats in his career – in bands led by Charlie Barnet, Tommy Alexander, Sal Salvador, Howard McGhee, Bill Berry, Bob Florence, Bill Holman, Shorty Rogers, Terry Gibbs and Frank Capp. And, he is a 31-year member of the Grammy-winning Supersax.

The most recent Morgan-led recording is an all-Charlie Parker project for Fresh Sound Records, A Suite for Yardbird, Lanny Morgan interprets the compositions of Charlie Parker. The repertoire includes both familiar and lesser known tunes, and features Morgan’s interpretations of Bird originals, along with preeminent players Tom Warrington on bass, drummer Paul Kreibich, and the late (2000) pianist Lou Levy. This follows Pacific Standard (Contemporary) and The Lanny Morgan Quartet (VSOP). 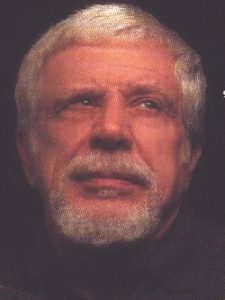 In the nineties, Lanny juggled his own jazz performing and recording ventures with a touring schedule worldwide as one of Natalie Cole’s regular support players, which included fellow jazz veterans such as Harold Jones and Jim Hughart, during her seven “Unforgettable” years. And, throughout the heyday of live music on television, he was involved in TV specials and a number of regular variety series. The heavy schedule of Los Angeles studio work also included many movie soundtracks.

Audiences around the world have heard Lanny Morgan, they just may not have recognized him. Pacific Standard, the 62-year-old alto saxophonist’s debut recording for Contemporary, and only his third as a leader, will change that. Morgan has been ubiquitous in American music for more than 30 years recently, as the lead woodwind player for Natalie Cole; for 23 years as alto saxophonist in the internationally popular jazz group Supersax; and, since the early 1960s, as multiple reed virtuoso with the big bands of Maynard Ferguson, Bill Holman, Bob Florence, Bill Berry, and others. Moreover, his successful career as a most valuable studio pro has put Morgan’s sound on recordings by everyone from Steely Dan to Shirley Horn.

Morgan has been ubiquitous in American music for more than 30 years recently, as the lead woodwind player for Natalie Cole; for 23 years as alto saxophonist in the internationally popular jazz group Supersax; and, since the early 1960s, as multiple reed virtuoso with the big bands of Maynard Ferguson, Bill Holman, Bob Florence, Bill Berry, and others. Moreover, his successful career as a most valuable studio pro has put Morgan’s sound on recordings by everyone from Steely Dan to Shirley Horn.
But as Pacific Standard proves, Morgan truly thrives at the helm of his own straight-ahead quartet. “I have to admit there’s nothing quite like playing with a big band behind you,” grants the multi-instrumentalist who has been in demand for his doubling talents on saxes, clarinet, and flutes. “But it’s so limiting, jazz-wise, no matter how liberal the leader is. You might get to play only 16 bars or a chorus, at the most. Whereas if you have your own group, you can set policy and play as long as you want until the rhythm section wears out. It is very liberating.”

Born in Des Moines, Iowa, Morgan was an accomplished child violinist long before he picked up a saxophone. His father played sax and clarinet as the leader of a radio orchestra, but his mother, wary of the carousing lifestyle associated with musicians during the Depression, sought to steer young Lanny clear of jazz. “I think she made my father promise not to bring his horns home,” he recalls. “When I got into the first grade, I came home with a violin, and I played that for 16 years.”

When he was ten years old, Morgan moved with his family to Los Angeles, where the bebop scene would soon come into bloom. In junior high school, Lanny started playing the clarinet, and by the time he graduated from high school, he had added alto to his arsenal. “I found myself walking to my violin lessons whistling ‘Groovin’ High’ or ‘Hot House,'” he remembers, “and I listened to Gene Norman’s ‘East Side’ radio show. It knocked me out and I knew I had to play jazz.” Upon graduating from Los Angeles High (as a math/science major), Morgan enrolled at L.A. City College, whose pioneering radio and recording orchestra provided a pool of musicians for Southern California bandleaders. In 1954, Morgan was hired by Charlie Barnet, and he never looked back.

Before being drafted into the Army in 1957, Morgan had briefly played with trumpeter Maynard Ferguson. After his discharge, he discovered that Ferguson had moved the band to New York. In March 1960, though, Morgan received the call to replace Jimmy Ford as lead alto saxophonist in Ferguson’s big band. “That was the most exciting time for me, in New York from 1960 through the middle of ’66,” Morgan says. “It was such a vital time in jazz. We used to play all the clubs and festivals, opposite so many good people. I think the first time we opened at Birdland it was opposite Art Blakey and the Jazz Messengers. Other times we were billed with Bill Evans, Cannonball Adderley, and Miles Davis.”

Morgan’s seasoned style is nonetheless strikingly individual. “You have to be careful because there are so many voices in jazz who are really distinctive,” he notes, “but some time ago, somebody heard something on the radio and said to me, That sounds like you.’ And I thought, Gee, maybe I do sound like me, maybe all these things I have absorbed through some sort of osmosis have come out sounding like somebody with a voice of his own.” Pacific Standard is a giant step in linking that unique voice to the name Lanny Morgan.