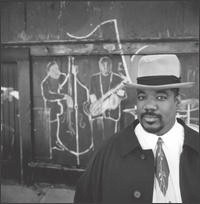 Kevin Mahogany grew up with the sound of Memphis and Mowtown as well as the ever-evolving rock ‘n’ roll in the turbulent ’60s. He attended the Charlie Parker Foundation in his hometown of Kansas City, and was teaching clarinet by the time he was 14. He also studied piano and became an accomplished baritone saxophonist, performing with three jazz bands while still in high school.

His interest in singing did not materialize until he attended Baker University in Kansas where the industrious Mahogany founded a jazz choir. He entered the school in 1976 and graduated with a BFA in Music and English Drama in 1981.

After College, Kevin established two groups, ensembles focusing on contemporary R&B, crossover jazz and classic ’60s soul music. At the same time Kevin was very attracted to singers such as Lambert, Hendricks and Ross, and Eddie Jefferson. Kevin recorded three well-received albums with the German independent Enja before landing at Warner Bros. Records in 1995. With his self-titled Warner Bros. debut in 1996, Kevin won acclamations from NewsWeek, which described him as “the standout jazz vocalist of his generation.” Esteemed writer Whitney Balliet declared in The New Yorker, “There is little Mahogany cannot do,” while the L.A. Times pronounced Mahogany to be “one of the first truly gifted male vocalists to emerge in years.” 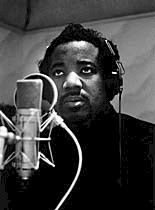 The album also earned excellent reviews including four stars from USA Today. That same year, Mahogany appeared in Robert Altman’s film Kansas City portraying a character inspired by Big Joe Turner. Since then, Kevin has been in high demand. He appears on the Malpaso release Eastwood After Hours, a Clint Eastwood ensemble project performed and recorded live at Carnegie Hall earlier this year. Additionally Kevin has headlined an IAJE Benefit, also at Carnegie Hall. If Kevin Mahogany had set out to prove he is the quintessential jazz vocalist, he could not have made a more convincing album. But Kevin leaves those concerns to the critics. He simply sings with great feeling and subtlety, transporting the listener to regions of the heart and soul – to ”

Another Time, Another Place” his second release on Warner Bros. Records – which is the real sign of a great jazz artist. Filled with rich originals as well as swinging standards, Kevin Mahogany delivers a focused and mature collection of jazz tunes with a mega-watt panache that so impressed his listeners in his critical acclaimed self-titled debut release last year. He encompasses blues, soul, gospel, and jazz, or as Mahogany once said, “I listened to everything while I was coming up. If all that is in your background, you should be able to sing anything…”