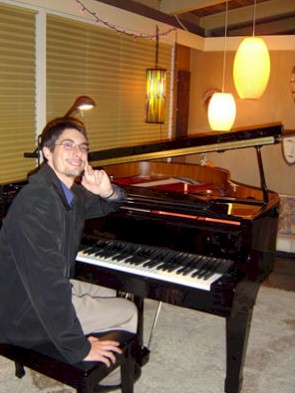 A native of Southern California, Josh Nelson maintains an active schedule as a jazz pianist, composer, and recording artist. At age 28, he has already performed with some of the most respected names in jazz, including Ralph Moore, Seamus Blake, Matt Wilson, Darek Oles, Anthony Wilson, Albert “Tootie” Heath, Ernie Watts, Alex Acuna, Abe Laboriel, Jack Sheldon, Peter Erskine, Bob Hurst, Justo Almario, Karrim Riggins, and Gilbert Castellanos,, to name a few. As a semi-finalist in the 2006 Thelonious Monk Piano Competition, Josh is, as pianist Benny Green put it, “making some noise of his own!”Josh recorded his debut album, First Stories (1998) independently under his own production company Steel Bird Music. Writer Mac Macdonald touted it as displaying “solid, confident musicianship….with an innate sense of swing and rhythm.”

Josh’s other recording endeavors include The Leadwell Project (2002), and Emergence (2001), EP-length projects which demonstrate his versatility as a pianist/composer/bandleader and also showcase the talent of Los Angeles’ up-and-coming jazz musicians. Anticipation (2004) continued to show Josh’s growth and development as a unique voice on the piano, with a strong focus on his original music. Josh is currently working on his new album, having recently signed with the Native Language Music record label. The record features saxophonist Seamus Blake, drummer Matt Wilson, guitarist Anthony Wilson, bassist Darek Oles, and vocalists Sara Gazarek and Erin Bode.

Josh received his Bachelor of Music in Jazz Studies from Long Beach State University. While there he was privileged to study with jazz veteran Cecilia Coleman, as well as with saxophonist Buddy Collette and arranger/composer John Prince. While at the Berklee College of Music 5 -Week Program he studied with Neil Olmstead, Tiger Okoshi, and Kim Steiner. Josh’s mentors include Bill Cunliffe, Alan Pasqua, and Benny Green, who have all greatly influenced his own playing and style. Josh is the recipient of countless honors, awards, and scholarships. During his high school years, he received the Louis Armstrong Award, the John Phillip Sousa Award, as well as numerous “Outstanding Soloist Awards” at music competitions from around the country, both on trumpet and piano. Josh also received the $10,000 Tom Talbert Scholarship from the Long Beach State Jazz Studies Department. Josh has also been a member of many honor groups, including the SCSBOA Honor Jazz 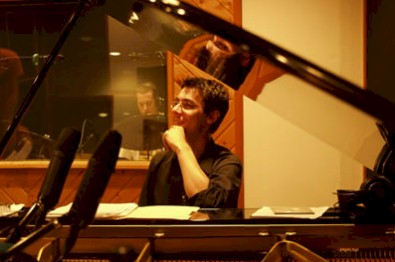 Band, the SCSBOA All-Stars, and the Grammy NARAS Band.

Josh continues to pursue his interest in other areas of music. He currently serves as Musical Director for jazz vocal sensation Sara Gazarek, having completed tours of the U.S., Japan, and Canada in the last year. Josh’s compositions for Sara have garnered him international acclaim and recognition, with Sara’s album reaching number 10 on the billboard Jazz Charts.

He has toured Taiwan twice performing and arranging film scores with the Hollywood Pops Orchestra and the Ars Nova Chamber Ensemble. He has performed with film composer Michael Kamen, Monty Python co-founder Eric Idle, and actors Jon Lovitz and Clint Eastwood. Compositions and performances of his have appeared on the television shows “The Division” (Lifetime), “Lucky” (FX), and “Jack and Bobby” (Warner Bros.), as well as the movie “First Daughter” (Paramount/Viacom). His time is also devoted to maintaining a private studio of jazz students, as a guest clinician for the Thelonious Monk Institute After School Jazz Program, and as a frequent guest instructor for the UCLA Music Program.

“Josh Nelson is a fine young player making some noise of his own in Los Angeles; I really enjoyed the album and I appreciate what he’s doing.”
– Benny Green, pianist

“It was terrific to hear you (and to get to play with you); you sound great.”
– Peter Erskine, drummer

“As for the future of jazz, I think it is secure in the hands of splendid young musicians such as Nelson…of this effort it really could be said that this album presents Josh Nelson and the Jazz Forefront.”
– Bob Agnew, L.A. Jazz Scene (excerpt from “First Stories” liner notes)

“How about that piano player? Boy is he going to go far!”
– Bill Watrous, trombonist

“The record (Emergence) really sounds great. Josh is a really talented composer and pianist, and I think great things will happen for him.”
– Bill Cunliffe, pianist

“Nelson is an exciting up and coming player.”
– John Stowell, guitarist

“Josh Nelson has exploded in popularity over the past two years…he’s touted by some critics as a major force in jazz in Los Angeles.”
– P. Catherine Shanks, Daily News August 14, 1999

“It is Nelson’s wide-ranging musical interests, and his desire to further explore and express those interests in future writing and performing, that makes Nelson a musician to watch in the years ahead.”
– Richard Pitnick, Coast Weekly August 19, 1999

“[“First Stories” displays] solid, confident musicianship, a verve that is often missing in some major label releases and songwriting that doesn’t sacrifice melody for innovation….
Nelson has an innate sense of swing and rhythm.”
– Mac Macdonald, GO! Art Calendar August 19, 1999

“As you listen, I think you will agree the we have the jazz leadership for years to come.”
– Bob Agnew, LA Jazz Scene