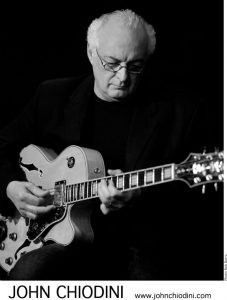 mposer John Chiodini began his performing career in clubs, recording studios and theaters throughout New England in the 1960’s and 1970’s.

As a member of the Boston Pops Orchestra under Arthur Fiedler, John made numerous appearances in concerts and on recordings, including the long-running PBS television series “Evening At Pops”. In the early 1980’s, he relocated to Los Angeles, touring, writing, and recording with Peggy Lee.