MUSIC IS his LIFE!!! Gene was born and raised in the city of Chill (Chicago, Illinois). His mother is from Chicago, and his father is from Belize. He started playing drums when he was about 2 or 3 growing up in the church.

He moved to Los Angeles about 4yrs ago where he attends school at CalArts studying music. Gene is a pretty easy going guy who likes to have fun! He loves to laugh, and people know him for being silly.

So far, Gene has been on tours thru Europe, Canada and the United States hitting the East Coast and West Coast and midwest with the likes of The Salvador Santana Band, Santana, Los Lonely Boys, Robert Randolf and the Family Band, and Ozomatli. 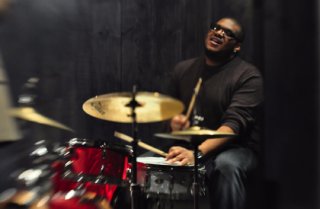 As a child, Gene taught himself to play drums. Throughout his youth, he was mentored by gospel drumming great, Terry Banks.

By the time he was a teenager, Gene was playing in numerous community choirs and jazz ensembles spanning from Chicago to LA, and even formed a tour schedule as a junior in highschool. Gene recieved his BFA in Jazz Performance at California Institute of the Arts, where he studied under famed jazz legend, Joe Labarbara (pianist Bill Evans’ drummer).

While in college, Gene toured the world with Carlos Santana, and his son, Salvador. Upon graduating, he quickly established himself as one of the most sought after drummers in Los Angeles.