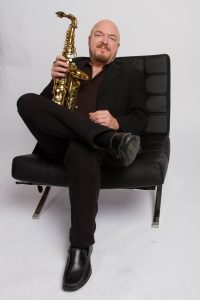 When you think of a cool, velvety saxophone that can soothe as well as scream, then look no further than Brandon Fields.. We caught Brandon Fields at the Baked Potato in North Hollywood with Walt Fowler on keyboards and trumpet, Steve Cardenas on guitar, Jerry Watts on bass and Dick Waller on drums. 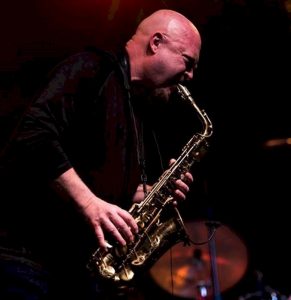 Born in Indiana and raised by music loving parents in Santa Ana, California, Brandon started playing the piano at age five, violin at eight and was enamored with the alto saxophone by ten. He began working as a freelance musician while still a teenager, and moved to the Los Angeles area in 1982 to embrace the inspiring local club and studio scene.

Brandon’s debut recording The Other Side Of The Story came out in 1986 demonstrating what would become the common thread connecting his original recordings, a multifaceted take on songwriting and a high level of interaction with his talented bandmates. Three additional concept albums followed, including A Coffehouse Christmas, Higher Ground (the music of Stevie Wonder), and most recently Fields and Strings, a beautiful collection of standards released in late 1999 on Paras Records. 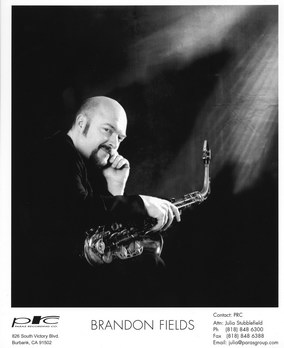 Brandon has also been a featured player on several movie soundtracks, including Austin Powers: The Spy Who Shagged Me, Class Action, Bull Durham, 2 Days in The Valley, The Preacher’s Wife, Waiting to Exhale and Dreamgirls. He received a 2002 Album of the Year Latin Grammy for Alejandro Sanz Y Solo Se Me Ocurre Amarte and performed on Ray Charles’ 2005 Grammy slamming Genius Loves Company.

Since June 2006 he has been performing with Barry Manilow for the legendary star’s house gig at the Las Vegas Hilton. When he’s home in Los Angeles, Brandon continues to write and record, honing his skills on a variety of auxiliary instruments (flutes, keyboards, and percussion), and to play at his favorite L.A. area clubs in both acoustic and electric settings, performing original material and arrangements of current faves, combining his wide range of influences into his own unique expressive instrumental style.