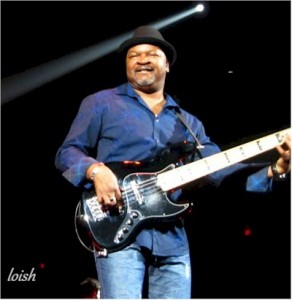 A native of Yaounde, Cameroon, jazz composer, arranger and bassist Andre Manga built his first musical instrument at the age of seven, a pseudo-marimba constructed from bamboo and part of a tree trunk; he later designed a guitar with strings made from bicycle brake cables as well.

A chance encounter with worldbeat superstar Manu Dibango convinced Manga to pursue a career as a performer, but his parents disapproved of his musical leanings and sent him off to boarding school; ironically, soon after his arrival the school formed its own orchestra, and he soon emerged among its leading players.

By age 17, Manga was a bassist with the Cameroon National Orchestra, soon after relocating to the city of Gabon to become a top session musician; in 1988, he moved to Paris, touring with Pierre Akendengue before joing his hero Dibango.