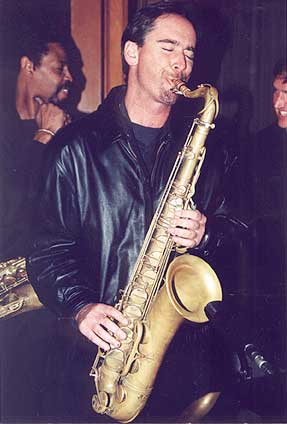 Steve Feierabend is a native of San Diego, California, where he grew up playing the clarinet, and then in high school he took up the saxophone.

In 1983, he graduated with honors from Berklee College of Music in Boston, having studied with Joe Viola, Joe Allard, Jerry Bergonzi, Herb Pomeroy, and others.

In 1996, Steve earned his Masters Degree in Jazz Performance at Rutgers University in New Jersey, where he studied, taught, and performed with Kenny Barron, Ralph Bowen, Ted Dunbar and Akira Tana.

Steve served as leader of his own group, Common Ground, whose CD Manhattan Fantasy was released in 1990. It was voted “CD of the year” by the Portland jazz society and received national recognition and review.

Bop Mambo, Steve’s third CD, is the culmination of 15 years of participation in the vibrant Southern California Latin jazz and Salsa scenes. The music is creative, modern jazz blended with mambo, cha-cha, bolero and Afro-Cuban 6/8 rhythms.