Born in Cleveland, Ohio on October 11, 1955, Peter Sprague was raised in Colorado until 1963, when his family moved to Del Mar, California. Inspired by his father’s love of jazz, he took up the guitar when he was twelve. By the age of fifteen he was devoting all his time and energy to learning music. He studied with San Diego jazz guitarist Bill Coleman, played in his high school stage band, and formed his first group, the Minor Jazz Quartet. Following a year’s study at the Interlochen Arts Academy, Sprague studied privately and performed around the San Diego area until 1976. That year found him moving to Boston to study with many notable musicians including Pat Metheny, Madam Challof and Albin Czak (a classical guitarist). 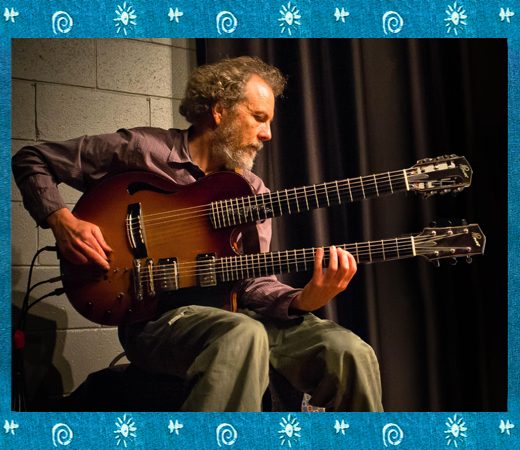 Peter returned to San Diego in 1978 and formed a jazz group called The Dance Of The Universe Orchestra that featured Kevyn Lettau, John Leftwich, and Peter’s brother, Tripp Sprague on saxophone. Peter has recorded many of his own albums on the Concord, Xanadu, and SBE record labels and has been a guest artist on many other records. Chick Corea, Hubert Laws, David Benoit, and Sergio Mendes are only but a few of the many great artists Peter has worked with. His debut with the Chick Corea band was a series of concerts at Disneyland on Memorial Day weekend. In a review the following day in the Los Angeles Times, Leonard Feather called Peter “…One of the emergent great guitarists.” Peter also worked with Chick on the film score to the movie “The Cat Chasers”, starring Kelly McGillis. Peter is active in the music book world having self-published nine of his own books, (The Sprague Technique, SpragueSongs, Soliloquy Songbook, Blurring the Edges Songbook, BrazilJazz Songbook, Soliloquy Songbook, Jazz Solos of Charlie Parker, Jazz Solos of Sonny Rollins, Jazz Solos of McCoy Tyner, and Assorted Jazz Solos).

Peter’s The Jazz Solos of Chick Corea is published nationally with Sher Music. Sprague also is the chief organizer and transcriber for Chick Corea’s music books. Hal Leonard Publishing has released Chick Corea’s Light Years, The Eye Of The Beholder, Inside Out, Chick Corea Collections, Beneath The Mask, and Paint the World, all books executed by Peter. Peter has been involved with GRP Records on a number of projects. He arraigned Chick Corea’s song “Spain” for the GRP All-Star Big Band record and video. This tune was played by the likes of Dave Grusin, Lee Ritenour, Dave Weckl, Ernie Watts, etc. Peter was featured on David Benoit’s GRP releases “Letter To Evan” and “Shaken, Not Stirred”. Peter toured with pianist David Benoit worldwide for three years. Also on GRP, Sprague played with Eric Marienthal, Russell Ferante, Jimmy Haslip, Alex Acuna, and Ivan Lins on Eric’s GRP record “One Touch”.

Sprague taught music at both Musicians Institute in Hollywood and California Institute of the Arts in Los Angeles for three years. Peter currently is involved with a group called “Blurring the Edges” whose self released CD was awarded the best contemporary jazz recording of 1994 from the San Diego Music Awards. Peter also has his hands in producing other artists and has been part of over one hundred CD projects. He runs a recording studio called SpragueLand and this is where you’ll find him wearing the hat of producer, engineer, guitar player, and arranger. His latest CD release is “Nikki’s Rose” on SBE Records. Sprague was recently voted the Best Jazz Musician of the Year 2000 by the San Diego Music Awards organization. Peter wrote and performed a twenty minute guitar concerto composition in May, 2000 with the Grossmont Symphony Orchestra.

neer, guitar player, and arranger. His latest CD release is “Nikki’s Rose” on SBE Records. Sprague was recently voted the Best Jazz Musician of the Year 2000 by the San Diego Music Awards organization. Peter wrote and performed a twenty minute guitar concerto composition in May, 2000 with the Grossmont Symphony Orchestra.