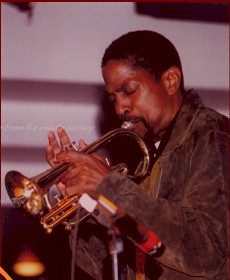 Nolan Shaheed is a very busy trumpet player in the LA area. He has appeared with Ray Armando, Al Williams, Louie Cruz Beltran, among many others

Nolan began to be noticed as a player when he was in the ‘Sweet Baby Blues Band” of Jeannie and Jimmy Cheatham. He then began playing in the band of Al Williams’ “Jazz Society.” The dexterity he displayed in playing the trumpet has made him a favorite playing with such artists as Ray Armando, and alongside Benn Clatworthy.

Nolan has been one of LA’s top studio musicians since 1974 and is in great demand in the Jazz scene. He currently owns a recording studio and is a music producer.