A graduate of Berkeley High School in California, Justin Brown started playing drums when he was two years old. He received a full-scholarship to participate in the UC Berkeley Young Musician’s Summer Program, in which he participated for four years, when he was just ten years old.

He received another full-scholarship to attend Stanford Jazz Camp his last two years of high school. Justin has performed at several jazz festivals around the world and was also a member of the National 2002 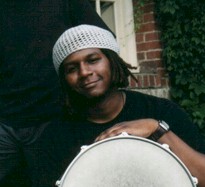 In August 2002, Justin was chosen from numerous applicants from around the country to receive a fellowship to participate in the inaugural Burbeck Institute Jazz Quintet, an intensive performance-based jazz studies program at the University of the Pacific (UOP) in Stockton, CA. In June 2004, Justin received a scholarship to attend the prestigious Juilliard School in New York.