Jimmy Haslip grew up in a rich musical environment. As a youth, he listened to Latin and salsa music around the house, including such Latin music icons as Tito Puente, Mongo Santamaria, Machito, Ray Barretto, Celia Cruz and Eddie Palmieri, to name a few. In addition to learing various Latin dances from his parents, Jimmy learned how to play a lot of basic Latin rhythms on the different percussion instruments that they had around the house.

He learned to play authentically on the claves, maracas, cowbell, bongos and the guido, which gave him that keen sense of time and rhythm that surfaces in his bass playing today.
His older brother Gabriel also played Jimmy some jazz and classical music, so he had exposure to John Coltrane, Charlie Parker, Eric Dolphy, Miles Davis and Dave Brubeck on one hand, and the music of 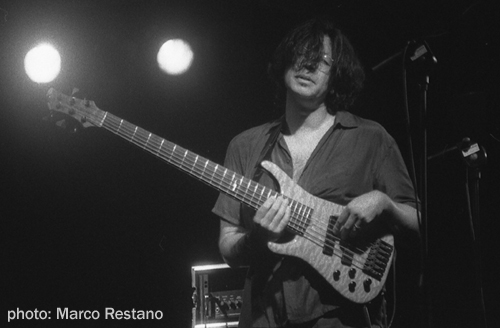 Debussy, Stravinsky, Beethoven, Mozart and Mahler on the other.

Jimmy says, “This was an eye opening time for me and even though most of this music was over my head, it definitely ignited my musical curiosity. I also was listening to a lot of Pop music, like the Beatles, the Supremes, The Four Tops, The Temptations, Wilson Pickett, James Brown and lots of great Pop music on the radio. I can remember that it was a very exciting time for music!”

Jimmy began studying music in elementary school, playing the trumpet and other assorted brass instruments (including the bugle, baritone horn and tuba) from age seven to fourteen. Jimmy picked up a bass at the age of fifteen and taught himself how to play it. “Actually the very first time I saw an electric bass, was at a junior high Valentine’s day dance. There was a live band playing and the bass player had an reddish/orange Hagstrom bass and a small Standel bass amp. It was then that I knew I wanted to play the electric bass! What a feeling! I’ll never forget it as long as I live. It was my very first real spark of creative passion!” 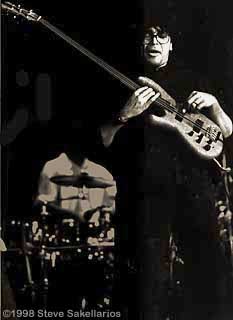 While being mostly self taught on the bass, Jimmy studied with a private bass/tuba player from New York named Ron Smith. He was also very fortunate to have studied with one of jazz music’s greatest talents. “…I did manage to study with Jaco Pastorius for a few weeks in the mid seventies, when he had just joined Weather Report. That was a giant leap for me as a serious musician and it filled me with a much higher level of inspiration. I think he was a major inspiration to all bass players at that time!”

To sum it up, Jimmy offers this inspirational piece of advice that is applicable to any musician, whether new or experienced: “I’ve basically learned so much from just about every musician I’ve performed with in the past and I will continue to learn from my experiences in the future. The learning process is never ending. The key is to always strive and search for knowledge. In learning new things everyday, there will be inspiration. That inspiration will thirst for knowledge and so the endless cycle goes. They will feed each other infinitely and theoretically the ‘creative well’ will never run dry.”

And last but not least, perhaps the most influential person in Jimmy’s career: “Jimi Hendrix was the sole inspiration for me playing music as a profession. Seeing him perform live was awsome and it lit a fire within me, which eventually gave me the drive to pursue music as a career.”
Jimmy also plays on the following projects released over the past year: Everette Harp “Better Times”, Dwight Sils “Easy”, Warren Sneed “Brothers”, Glenn Jones “It’s Time”, Gary Wright “Best of the Dreamweaver”, Marc Antione “Madrid”, Ricky Lawson and friends “First Things 1st” , “Heart and Soul – New Songs from Ally McBeal” featuring Vonda Shepard, John Molo’s “Modereko” Gerald Albright/Will Downing “Pleasures of the Night”, and Tribute to Lowell George “Rock n’ Roll Doctor”.

Artists Jimmy Has Performed With

Jimmy’s credits are a virtual who’s who of the popular and jazz music industry. This is the “short list” of some of the talents he has recorded and/or toured with over the past 25 years: