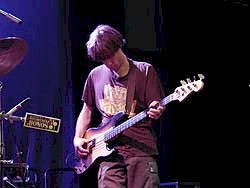 Jim Campbell has been singing professionally since 1991 when he moved to Los Angeles from Louisville, KY. He grew up around his mother Carole’s Sweet Adelines activities and sang along with her recordings of male quartets like the Suntones and Bluegrass Student Union. Hooked on barbershop singing, he soon joined the Louisville Thoroughbreds and cut his barbershop teeth under the direction of Jim Miller and Allen Hatton.

At Bellarmine College he studied voice for 4 years and was heavily involved in their choral music program. He also appeared in professional regional musical theatre productions and was a chorus member with Kentucky Opera. Majoring in Communications, he also was a sergeant in the US Army Reserves for 6 years. Heading west, he studied opera at the Vocal Institute at UC Santa Barbara with Elizabeth Mannion.

In 1992 he began singing bass with the Dapper Dans of Disneyland. Jim has also been bass soloist and section leader for Canterbury Choir at All Saints Church in Pasadena since 1991, recording R. Vaughan Williams Dona Nobis Pacem. In addition to singing and touring with The Perfect Gentlemen while winning the 2002 National A Cappella Championship, Jim is a freelance singer in Los Angeles, having recorded various commercial jingles and TV show themes.

A featured soloist with the Pacific Symphony Pops and Santa Barbara Symphony, he has also sung with Pacific Chorale, Angeles Chorale and The LA Choral Artists. Musical theater credits include Kenickie in Grease, Action in West Side Story , Curly in Oklahoma!, and a soloist in Leonard Bernstein’s Mass. On television Jim has sung on The Simpsons (Homer’s Barbershop Quartet), Home Improvement, The Tonight Show with Jay Leno (backup for Chet Atkins and also singing “Old Man River” while Jay Leno lip synched), That 70s Show, Gilmore Girls, Blossom and various Walt Disney specials.

On film he has sung on Disney’s The Haunted Mansion. Jim makes his home in Glendora, CA with his lovely wife Danae and their son Will.